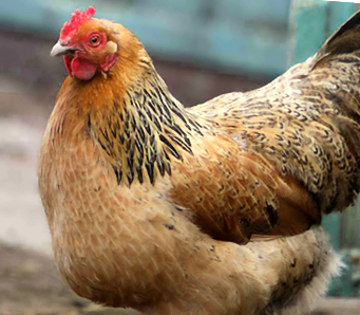 These small parasites aren’t fun to treat, but will do little harm if taken care of as soon as you notice the symptoms.

The signs are that the scales on the chickens legs will protrude and stick out something like the petals on a ripe pine cone. With larger breeds of chickens you probably won’t even notice them until the bird begins to limp. With bantams I have seen in more than one case a sort of tan crust on the legs. Maybe like a lump of the cream of wheat cereal, only off white.

They will cripple bantams or large hens in time.

I treated my flock for them after a friend gave me some bantams. The mites quickly spread to the whole flock.

I used the kerosene and oil with about 2 parts oil to one kerosene. It worked well, but to do it over I would check with a veterinarian as there are probably kinder ways to treat it. I say this as kerosene does burn. Better than mites, but there is probably a more modern way to do it that works as well.

If you only have half a dozen hens I would just use Vaseline. It can be rubbed on the legs and would be much more pleasant for the chickens. I do think you should go well into the feathers on the leg, such as an inch above the joint, but not the whole leg or anything like that.

My guess is that if you have a dozen or so chickens, dipping the legs would probably be better or at least less time consuming. I also assume if you have more than a very few for pets, they might be difficult to catch. I put up a small temporary fence in the chicken house, went in at night and just picked them off the roost, placed them in the temporary pen, then removed the pen when I had them all done. That way I was sure not to miss any.

The chickens need to be dipped again in a couple weeks. I have seen both 2 weeks and 3 weeks. I do know they need to be done again because the first dip kills the adults. The second dipping gets the mites that hatch from the eggs living under the scales. I know 3 weeks works fine because it is what I did, and I had no problems so I got the mites that hatched before they were old enough to lay more eggs.

There is also “roost paint” which I believe to be nicotine sulfate, which will kill the mites on the roost and the fumes will go into the feathers and also kill lice.

The mites can also be gotten from wild birds. This is why anyone with chickens should never encourage wild birds around their property. Many diseases are carried in wild bird droppings that would create major problems.

The last and worst step in totally ridding the house of mites and other insects that might bother the chickens is to thoroughly clean and disinfect the entire inside of the coop, floor to ceiling.

Almost any type of soap and water or cleaner will work. Once this is clean, it can be sprayed with malathion and water mixed in the ratio recommended on the bottle. I say this, but with so many poisons of this type being banned, it might not be available and if it isn’t, I would recommend calling a veterinarian, or your county agricultural agent, usually working out of the state college.

If you don’t clean the coop, you will probably get the mites back. In some cases it has to be done a 3rd time. If you only have a few birds, you might just wish to do it a 3rd time just in case.

Back Home For More From Captain Kelly